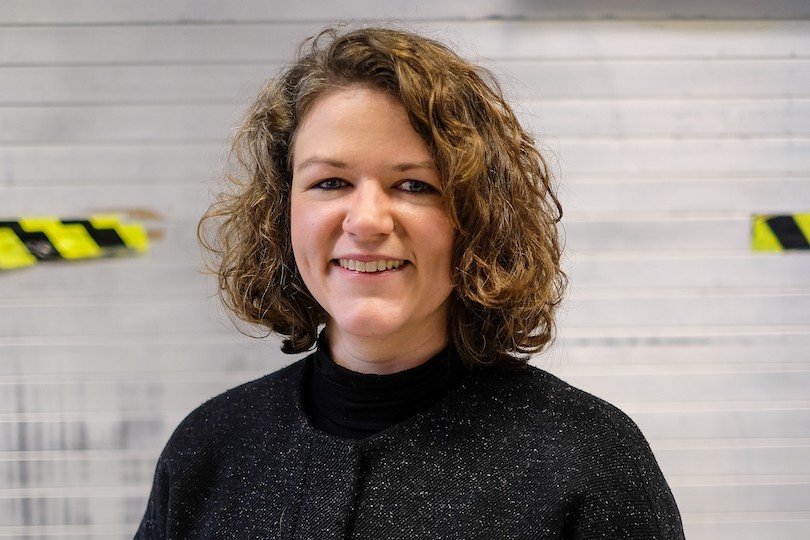 This interview is part of a series of interviews with academics and practitioners at an early stage of their career. The interviews discuss current research and projects, as well as advice for other early career scholars.

Lydia C. Cole is a Postdoctoral Researcher at Durham University on the project ‘The Art of Peace: Interrogating Community Devised Arts-Based Peacebuilding’. She has previously held the position of Associate Lecturer at University of St. Andrews and received her Ph.D. from Aberystwyth University in 2018.  Her research spans several fields of inquiry including feminist international relations, peace and conflict studies, visual arts, and transitional justice. She is particularly interested in the uses of ethnographic, artistic, and creative research methodologies.

What (or who) prompted the most significant shifts in your thinking or encouraged you to pursue your area of research?

I continually encounter people and work that have an impact on my thinking and research. My introduction to international politics was at University of Manchester, where I studied for my undergraduate and MA degrees. While many of the courses were useful introductions to critical IR approaches, Cristina Masters’ course on ‘Gender and International Relations’ was particularly transformative. I still remember reading Cynthia Enloe’s Bananas, Beaches, and Bases during the first weeks of the course and being in awe of how much was conveyed about the complex intersections of gendered power through subjects and sites that weren’t – at that time – typically within the purview of international relations. I’ve continued to be inspired by feminist thought in my research which offers important tools to examine issues of power and injustice within international politics.

Increasingly, my research has been informed by creative approaches to global politics. During my PhD, Jenny Edkins was particularly encouraging of my narrative curiosity and gave me space to experiment with more creative forms of writing. At different points in my narrative journey, I’ve also been inspired by Annick Wibben, Naeem Inayatullah, Himadeep Muppidi, Elizabeth Dauphinee, and Sarah Naumes (to name a few). Working with conflict textiles and speaking to some of their makers for Stitched Voices and Threads, War and Conflict generated a further creative shift, this time toward practices of making. Engaging with different sites of activism and resistance through making has prompted me to rethink how we do international politics.

Conceptually, my research is indebted to many of the academics, activists, and artists that I have met. This has been especially the case with my experiences of fieldwork in Bosnia and Herzegovina (BiH). I always find it interesting to reflect on how ideas and concepts evolve through chance encounters, conversations, or particular events, as well as their interconnections with broader literature.

In your PhD thesis, you develop the notion of a feminist researcher as a witness. In what ways can researchers act as witnesses or offer recognition? And, conversely, when do we fail to do so?

The thesis begins with a central problematic: that of the hyper-visibility of sexual and gender-based violence, globally and in BiH (which has been discussed by scholars including Maria Stern and Maria Eriksson Baaz and Marsha Henry), with the combined knowledge that many survivors have largely been forgotten. Exploring this tension within various post-conflict justice processes, the thesis asks after the forms of recognition invoked and operationalised at each site. Throughout the thesis, I develop a series of conceptual frames of recognition which include visibility, legal-bureaucratic recognition, trauma and psychological recognition, and witnessing.

My understanding of witnessing is drawn from a range of contexts but is firmly situated within feminist approaches and ethics. Most importantly, the concept is developed in conversation with many of my interlocutors in BiH who were engaged in feminist activism and organising. In this context, Jasmina Husanovic’s article on postcolonial witnessing is particularly thought-provoking. For Husanovic, feminist scholarship and politics are sites at which witnessing takes place, through:

“Weaving the spaces between us, telling the stories of our losses, pondering our old/new belongings, revising and reimagining our pasts/presents/ futures, forging new communalities and engaging in hopeful political practices.” (p. 102)

Developing these notions of witnessing through reflecting on its narrative, intersubjective, and reflexive elements, I outline an understanding of witnessing which acknowledges its processual nature. In this sense, it poses a challenge to some of the language around recognition within global policy which sometimes makes it seem like something that might simply be awarded, with the implications of finality and forgetting that go alongside this.

Embedded within this broader understanding of witnessing, the feminist researcher as witness operates as a methodological tool or guide. Enabling me to locate the various politics of post-conflict justice processes, it also operates as a broader prompt to engage with the role of the researcher within these processes. Specifically, I use it to engage with issues of positionality, power, and hierarchy in the research setting, as well as to question how legacies of violent knowledge production about BiH influence the research. I found this particularly important to attend to in the context of research about sexual and gender-based violence.

I’ve reflected on some of the failures of my own fieldwork, particularly through miscommunication and inappropriate affective responses during research encounters, and in short narrative about observing street harassment and feeling unable to intervene. I think a failure to witness is something bigger than these individual moments though. Failures of witnessing are more about failure to reflect on the politics of these encounters and asking what we (individually and collectively) can learn from them.

Reflecting a broader context of feminist interventions into emotion and affect in fieldwork, I wanted to foreground two interviews undertaken as part of my PhD research where I had unexpected (perhaps even, inappropriate) reactions. As the title of the chapter suggests, these were tears and laughter. At the time these moments in the interview felt very much like failures. Neither fit the script of how I thought a ‘good’ interview was supposed to go and each reaction drastically changed the course of the conversation. Despite this, when I returned to the interviews in the writing process, I found that these ‘failures’ actually seemed to shed further light on my research context; particularly, in terms of my understanding of how people navigated various post-conflict justice processes in BiH.

Writing the chapter at a distance from the thesis – and re-reading Clare Hemmings’ work on affective dissonance and solidarity – enabled me to reflect on the intersections of affective failure, mis/recognition, and knowledge production. Engaging reflexively with these encounters helped me to reformulate my ideas of what research success or failure looked like and to instead situate fieldwork as a process of un/learning. In the chapter, I also argue that the forms of embodied insight that emerged would not otherwise have been possible. In a more general sense, the practice of acknowledging affective failure is simply about being open to the surprises which mark our research and having the tools to learn from the unexpected.

Stitched Voices and Threads, War and Conflict were both exhibitions that drew on textiles in the Conflict Textiles collection, curated by Roberta Bacic and Breege Doherty. Engaging with the textiles, what was immediately notable was the way that the textiles communicated a continuum of political violence and its resistance. The textiles depict protest, disappearance, displacement, hopes for return, economic violence and inequality, and testimony to individual loss, among many other topics. The plurality of narratives about situations of war, conflict, and political violence is particularly useful pedagogically. I’ve found that teaching with conflict textiles helps to open up discussions about the ways that political violence impacts everyday life, while also centring how people organise and resist.

Personally, I also learned a lot from the whole experience of curating the exhibitions. One of the most significant aspects was our conversations with makers from various global contexts, each of whom used textile to speak out about political struggles. Some of these interactions came through talks and other events, but it was the practical textile workshops which I found most transformative. In these workshops, participants had the opportunity to engage with these different textile traditions, including arpilleras, peace banners, and embroidered handkerchiefs. These workshops were useful in facilitating conversation between different participants but also generated a more tactile, embodied form of knowing about the politics of textile.

You recently started a section of The St Andrews Journal of International Relations called “Openings,” which aims to feature media such as poetry, visual art and video. How do you think these forms can supplement more traditional forms of academic scholarship?

Creative forms like poetry, visual art, narrative, spoken word, etc. are already spaces in which people engage with (international) politics. I think about these less as a supplement to traditional forms of scholarship and more as an alternative mode of engaging in the political. My co-editor (Laura Mills) and I start this section at a time where there is already an impressive range of international relations scholarship adopting more creative forms of writing and expression; and also where our teaching is engaging with this creative practice and production. What we hope is that the section will be a space that is open to a variety of contributions and forms. Our first issue of Openings will be a Special Issue which unravels the various ‘threads’ of the exhibition Threads, War and Conflict, encouraging contributors to complement the creativity of the exhibition. Beyond this, we are keen to hear from students, artists, activists, and practitioners who might like to contribute to Openings. If anyone has a piece of creative scholarship that they would like to submit, they can do so here.

What are you currently working on?

I am currently working on a project which focuses on grassroots art and peace in BiH, which has been a great opportunity to draw together some of the different strands of my research and thinking. Particularly, I’m developing a couple of articles which focus on different aspects of artistic practice and production. The first of these focuses on counter-political curating at Vraca Memorial Park in Sarajevo, while the other responds to a sound archive of Mostar that is currently under development. In the longer term, I also in the process of rethinking my PhD thesis as a book and am in the process of developing a new project which develops some of the different aspects of my thinking on art, creative methods, and political violence.

What is the most important advice you could give to young scholars?

I’ve always enjoyed engaging with different projects and initiatives that are at a tangent form my main area of research. While it’s definitely important to prioritise things like PHD research, participating in research groups, organising events in collaboration with arts spaces, and curating exhibitions has meant that I was exposed to a range of ways of engaging in global politics. You never know, some of these tangents might lead to new connections and projects…

TikTok and WeChat: US to ban app downloads in 48 hours

Ransomware attack on a hospital may be the first ever to cause a death. Here’s what happened

6 Acts of Kindness That Will Inspire You – E! Online

heyglobe.xyz is your news, entertainment, music fashion website. We provide you with the latest breaking news and videos straight from the entertainment industry.
Contact us: contact@heyglobe.xyz

TikTok and WeChat: US to ban app downloads in 48 hours

Ransomware attack on a hospital may be the first ever to...